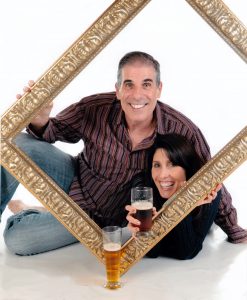 Bon Beer Voyage is an award‐winning craft beer tourism and education company that was created as the beer connoisseur’s answer to wine events.

A two-time winner of the Food Trekking Awards from The World Food Travel Association, Bon Beer Voyage’s expertise and connections in the universe of beer and breweries has put them in the index in books such as Beer FAQ and The Good Beer Guide to Belgium.  Co- founders Ruth Berman and Mike Arra also serve as beer experts for USA Today’s 10Best Reader’s Choice Awards.

When the borders are open, Ruth and Mike can be found traveling the world with their guests on custom curated Beercations, tasting their way through breweries of all kinds- from microbreweries in old farmhouses to the revered breweries of Trappist monasteries,  dining on cuisine à la biére, and enjoying the culture, history and most importantly, the people in the places they visit. They have been teaching beer tasting in person for over a decade and now offer their classes online for both public and private events.

For more info about Bon Beer Voyage Tours check out  their website: www.bonbeer.com

TV host and former Forbes beer/spirits contributor Tara Nurin writes for hundreds of media outlets — such as USA Today and Food Network — and presents publicly — for entities like the Smithsonian and Colonial Williamsburg — on topics that relate primarily to beer business and culture. In September 2021 she released her first book, A Woman’s Place Is in the Brewhouse: A Forgotten History of Alewives, Brewsters, Witches, and CEOs, which won a first-place award from the North American Guild of Beer Writers. Nurin designs and teaches for-credit beer and spirits courses for Wilmington University (DE) and provides marketing consulting services for a client roster that includes Visit Philly and NZ Hops, Ltd. She is frequently quoted as a beverage expert in publications such as Wine Enthusiast and Food & Wine. After residing in 11 states and countries, the trilingual Nurin has chosen to live as an urban pioneer on Camden, NJ’s, riverfront.

Currently co-owner of Belmont Station, an internationally renowned beer store and bar in Portland, Oregon, Lisa Morrison has worked as a craft beer evangelist since before she wrote her first beer column on Citysearch in 1997. Her beer career has taken her to many wonderful places around the world, as an award-winning beer writer, judge, instructor, event planner and even a beer talk-show host and podcaster, marrying her former life as a TV news reporter/anchor with her passion for craft beer.

Among her accomplishments: Lisa co-founded Oregon Craft Beer Month and Portland Beer Week, and the Sasquatch Brew-Am, an annual golf tournament that raises money for scholarships for brewers. She was on the founding and scholarship boards for the Pink Boots Society, an organization for women in the beer industry, and was co-founder of Barley’s Angels, an organization created to help women consumers learn more about beer that now has chapters around the world. Lisa is a proud Knight of the Brewers Paddle in Belgium. And, yes, that is a thing. 😊